Not to be Underestimated

Those who are familiar with Apert Syndrome know that the fingers are the single most defining characteristic of the syndrome.  During normal development, the fingers start out as fused together although eventually, a signal is sent to the hands and feet so that the fingers and toes separate.  Unfortunately, this process does occur for a person with the syndrome and hence the fusion.

Surgery is most often recommended as early as possible so that as the child grows, his or her ability to hit the developmental milestones are not hindered.  Unfortunately, even with the syndactyly release, their fingers remain stiff because of a missing middle joint (called the PIP or proximal interphalengeal joint).  In the case of Nina, while she now has 5 fingers on one hand (the other hand surgery will be scheduled soon so on the left hand she only has 3 digits), she is still unable to make a fist or bend her fingers like other children.


The lack of hand dexterity makes it difficult for her to perform simple tasks.  Holding a pen, writing, cutting with scissors, buttoning a shirt and even picking up small objects from the floor are always a challenge.  This is one of the things that Nina's teachers in school take into consideration whenever they present materials to her.  But sometimes, our little girl seems to have more faith in her abilities than the people around her.

One example in particular is the sewing activity.  Although sewing is a standard material for her age group, Nina's teacher opted not to present it to her because of her condition.  Her teachers were worried that the might end up frustrated with the activity, but she kept bugging them about it.  Eventually, the teacher relented.  To her surprise, not only did Nina complete the activity at the first try, she did it excellently!  And because she wanted to bring it home to show to us, she did it twice so that she could leave one for her portfolio.

When she brought home the project, I had to ask her several times if she was the one who did it or if had gotten help.  And even though she said she did it all by herself, I wasn't convinced and even had to confirm it with her teacher. (I know, bad mom!) 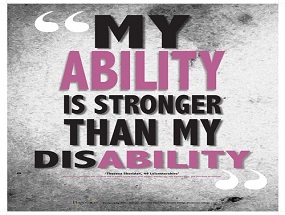 Not only was it a big achievement for Nina, it was also an eye-opener for her teacher not to undermine the capabilities of her students and for me not to limit the capabilities of my daughter.  I read this quote from Facebook page for mom's with special kids needs, it said: "Let us not let textbooks limit what our child can or cannot do."  And in the same way, we should not let one person's disabilities define what he or she can or cannot do.

Strength does not come from what you can do.
It comes from overcoming the things you (or other people)
once thought you could not.


I can't believe how quickly time has passed.  I feel that the past five years just sped by without giving me a chance to cherish every moment.  You've been telling us that you aren't a baby anymore and though I agree, a big part of me cannot seem to let go of that thought.  Yesterday, you declared to Tita Pu that you were 5 turning 10years old.  You know what?  Sometimes, we think so too!

We're happy that you love your new school and even your teachers proudly inform us that you seem to have coped up very well with the Montessori Method of learning.  You know, there have been several instances where you've managed to stump Kuya with the facts that you learn from school (although I'm sure he wont admit that so let's keep that as a secret, okay?).  Dad and I pray that as you grow older, your enthusiasm for learning and for experiencing new things will remain.  We love seeing your face light up with joy whenever you experience something new or when you proudly show us something that you've accomplished.  Know that Dad and I will continue to do our best to provide you and your Kuya with more opportunities for learning (coupled with a lot fun, of course) for as long as our bodies can hold up.

I must say that this year was a good year for you health-wise.  Although we continue to deal with issues on colds, cough, asthma and allergies, I'm happy that you've managed to stay away from any hospital confinements and frequent trips to the Emergency Room - we had 1 or 2, right?  Let's hope that this year we can trim down those visits to a zero, shall we?

This will be a very very good year for you, I am almost sure of it.  Of course, we should expect that there will be challenges but we are pretty sure that you will be able to handle these well.  You have Dad, Kuya and Mom (plus all our other relatives) to back you up so what else have you got to fear, right?

Keep viewing life the way you do, sweetheart.  Because as you do, you continue to teach us and to inspire us that nothing can and should ever keep us from reaching our dreams.