During day three of a 4-day weekend here in Manila, we decided on a quick trip to the zoo so that the kids would have a special weekend somehow.  It would have been a great time to go out of town but because hub’s office does not follow the local holidays, he didn’t have a long weekend like we all did.  In fact, we only had the morning of Monday free because hubs had to work that evening so we needed to give him enough time in the afternoon to catch some sleep.

The zoo, we felt, was one of the best places to bring the children because it allows them to enjoy themselves and learn at the same time.  Among the zoos we had visited were the Manila Zoo (which was on the top of our list only because they were the only ones with an elephant),  Ark Avilon (a bit expensive but interesting because you can feed the animals and their area is very clean and the animals are healthy), Tagaytay Highlands (also expensive but we had a sponsor then but the animals really looked emaciated except for the pot bellied pigs) and Residence Inn (a bit far but very nice).  Among those places, it seemed that Ark Avilon and Residence Inn maintained their animals quite well.  Obviously, we have done our round of the zoos here in Manila and that has left us with 2 remaining options: Avilon Zoo and the Malabon Zoo.  Malabon Zoo was a hands down choice for us because the entrance fee was only P120 per head compared to the P400 per head fee for Avilon Zoo.

In terms of appearance, I felt that the Malabon Zoo could use a lot more improvement (like better signages, paticularly about the animals and less quotations that I believe are hardly even read).  But compared to Manila Zoo, their animals looked well maintained/fed and their surroundings were much cleaner than Manila Zoo. It was also an added bonus that the place was filled with trees that kept the walk ways shaded and cool inspite of the humid Manila weather.  Malabon Zoo is the only one that has a live Grizzly Bear in its care – and it was quite impressive even if the bear practically ignored the people ogling at him and the kids roaring at him.  There were a lot of different varieties/species of fish and birds as well and lots and lots of tigers.  Of course, there were two layers of screen around most of the animals so it was quite safe for kids to roam around the premises.  Our children enjoyed seeing the tigers up close and would try to get their attention by roaring out load.  I guess the tigers have gotten used to all the attention because they too barely paid attention to our two tiger-wannabees.  Some of the tigers were in a glass enclosure so we were able to take photos where it seemed as if the tiger was actually just behind the children – cool! 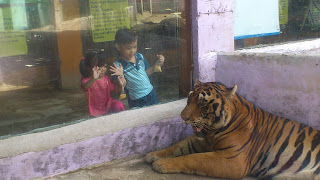 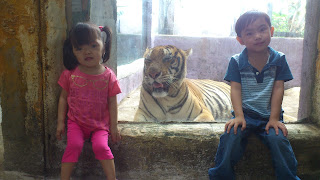 The kids also enjoyed feeding the ducks, the deer and the fish with the animal feed that you could purchase from the premises at only P30/bag. 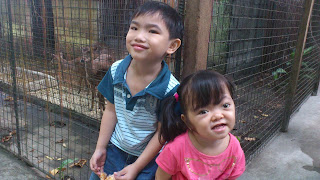 My answer was a quick no to the offer to have a picture taken with the pythons but hubs and Kuya were up to it so we they readily went up the stage to have their photo taken.  I was concerned that Kuya would freak out but as it turned out, he was very brave even when the snake was placed on his dad’s shoulders.  When the black one was added, Kuya suddenly cried out loud and started struggling to get loose.  Apparently, the tail of the yellow python found its way to his belly button and was trying to find a cozy spot.  It was cold and because Kuya was ticklish in the belly button area, he was not at all comfortable with that feeling.  That was the only reason why he cried! 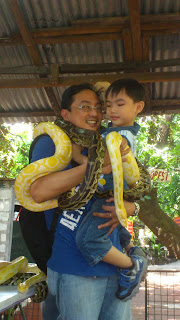 Even our yayas were brave enough to have their picture taken with the snakes.  It was only Nina and myself who declined and even if we were the only ones, I maintain that I don’t regret having missed that opportunity at all.  No thanks!

All in all, the kids enjoyed their weekend extension.  We only stayed at the zoo for about 2 hours – just a  short trip but it was worth every minute.  Lesson learned:  there are a lot of activities for families to do on a long weekend that won’ cost you an arm and leg.  The most important thing is that you get to bond together and create happy memories that you and your children will remember for a long time.

Posted by Pittipat at 6:06 AM No comments: